The overarching research theme in the lab is to understand the fundamental, molecular mechanisms underlying microbial self-defence mechanisms. 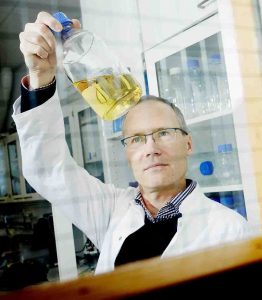 In our work, we use biochemistry and structural biology (x-ray crystallography and single-particle electron microscopy) to characterise protein-protein, protein-RNA, and protein-DNA complexes from mainly bacteria and archaea. Below are some more detail about some of our projects.

Our research involves comparative sequence analysis using bacterial whole genomes or meta-genomes, with the aim of identifying homologous defence and survival systems through “guilt by association”. We then pick out individual molecular systems, which we express and study in vitro by biochemistry and structural biology using x-ray crystallography and electron cryo-microscopy. Detailed information from this molecular analysis is then used to develop functional hypotheses, which are tested in vivo using suitable model systems. 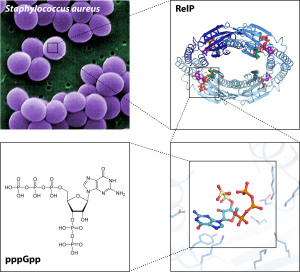 Staphylococcus aureus is a grape-shaped coccus (round bacterium) and an opportunistic human pathogen that can be dangerous to hospitalised patients. Especially  the recent emergents of methicillin-resistant S. aureus (MRSA) has caused concern in hospitals around the world and is predicted to become a major health issue in the future. We have studied an enzyme called RelP from S. aureus, which is involved in synthesising a unique, so-called alarmone, molecule, pppGpp, e.g. during nutritional stress. When this molecule appears, it binds to a wide range of other enzymes in the cell and dramatically reprograms S. aureus to better be able to withstand the stressful situation. By understanding the molecular details of such processes, we can potentially develop novel antibiotics that prevent the stress response. 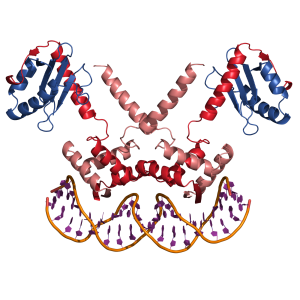 Many, particularly pathogenic, bacteria contain a great number of so-called toxin-antitoxin (TA) loci encoding two proteins, a toxin, which is typically a small RNase, and an antitoxin, which binds to, and inhibits, the action of the toxin under normal circumstances. During cellular stress, such as starvation or antibiotic pressure, the labile antitoxin is degraded activating the toxin, which will tune the gene expression by degrading specific RNAs, such as tRNA, mRNA, or rRNA of the host cell. Some pathogenic bacteria, such as M. tuberculosis, contain a vast amount of TA loci including 45 of the VapBC-type. We are interested in several aspects of TA biology, including the structure and substrate specificity of the toxin RNases, the mode of inhibition of the toxin by the antitoxin, as well as the DNA-binding abilities of the antitoxins, which serve to auto-regulate expression from the TA operon.

Activation of the bacterial stringent response

Cellular stress in bacteria elicits the so-called stringent response, which is associated with a shutdown of transcription, translation, and cell division. A major factor in stringent response control is the modified guanosine nucleotide, (p)ppGpp, also known as “magic spot”, which is produced in large quantities intracellularly when bacteria encounter stress. The magic spot subsequently binds to a wide range of proteins and enzymes in the cell that widely reprograms cell physiology.

We are studying the mechanisms by which (p)ppGpp is produced in bacterial cells as well as the targets of this “alarmone” molecule. For example, we have determined the crystal structure of the S. aureus small alarmone synthetase (SAS), RelP, which synthesizes (p)ppGpp from ATP and GTP/GDP. Using substrate and product analogues, we were able to determine high resolution crystal structures of the enzyme both in the pre- and post-catalytic states, i.e. bound to either ATP and GTP or pppGpp. Together, these structures provided a complete view of the enzymatic cycle of the protein.

Ongoing work in the lab is focusing on other magic spot-synthesizing enzymes as well as complexes of (p)ppGpp and target proteins in the cell.

The interplay between several defence mechanisms 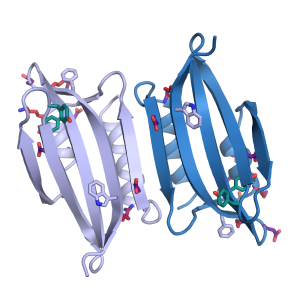 In both bacteria and archaea, genes that are related to self defence tend to cluster in genomic regions known as “defence islands”. The areas of the genome are rich in particularly CRISPR-Cas and toxin-antitoxin loci. We are interested in understanding the biological and functional basis for this co-localisation. Are the loci co-localised because they relate to similar biological responses or is there a direct interaction between components of several defence systems? Some data indicate the latter, and there is evidence that some Cas proteins are derived from ancient toxin proteins.

But when bacteria and archaea defend themselves there is usually a fast response by the viruses that attack them, either by mutational escape or production of anti-proteins that counter the function of the self-defence systems. In collaboration we the lab of Xu Peng at the University of Copenhagen, we have recently characterised and determined the structure of the first archaeal anti-CRISPR protein, AcrID1 from the hyperthermophilic archaeon, Sulfolobus islandicus. This demonstrated not only that the anti-CRISPR protein has a tendency to dimerise but also highlighted specifically which Cas protein is targeted in the counter-attack by the virus.

Selected publications from our lab relevant to this subject
He, F. et al. (2018), Nat Microbiol, e-pub ahead of print (PubMed). 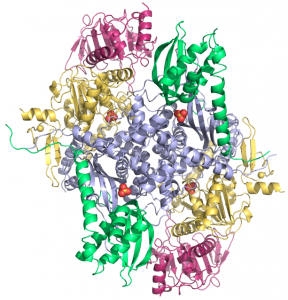 When stressed for nutrients, most bacteria change their physiology and gene expression dramatically. In E. coli, for example, the so-called pho regulon is activated upon starvation for the essential nutrient phosphate, required for lipid, co-factor, and nucleotide biosynthesis. Some of the genes expressed under these circumstances include the 14-cistron phn operon, which constitutes a complete uptake and processing system for a series of compounds known as phosphonates. In contrast to ordinary organic phosphate compounds, from which the phosphate group can be liberated relatively easily by hydrolysis, phosphonates contain a direct covalent bond between carbon (C) and phosphorus (P). In some cases, cleavage of this bond and thus, use of the phosphorus atom for biosynthetic reactions, requires radical chemistry.

The phn operon encodes a complete phosphonate processing system that allows incorporation of the phosphorus atom into standard nucleotides, such as PRPP (5′-phosphoribosyl-3′-diphosphate). Of the 14 encoded proteins, at least 5 polypeptides (PhnGHIJK) assemble into a 260 kDa complex known as C-P lyase, a huge multi-subunit complex catalysing at least two reactions on the pathway. In 2015, we determined the structure of a 220 kDa core complex of C-P lyase consisting of PhnGHIJ to 1.8 Å by x-ray crystallography as well as a lower resolution structure of the complete PhnGHIJK complex by negative stain EM. Ongoing work in the lab is currently focused on understanding the molecular mechanism of this complex machinery, both by x-ray crystallography and cryo-EM. 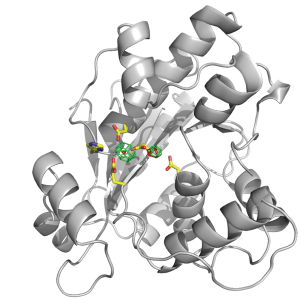 Our lab has also worked on eukaryotic RNA decay and RNA processing in the eukaryotic nucleus focusing on understanding how RNAs are degraded and processed in eukaryotes such as yeast and humans.

As part of this line of projects, we determined the first crystal structure of a protein from the eukaryotic exosome complex (Rrp6p, Midtgaard et al., 2006) and contributed to understanding the reaction mechanism and specificity of deadenylase enzymes such as yeast Pop2p (Jonstrup et al., 2007).