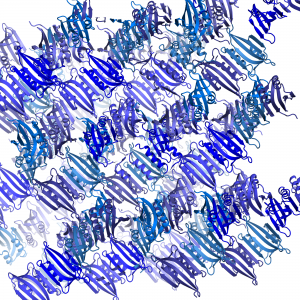 Today, in collaboration with the labs of Xu Peng (University of Copenhagen) and Eugene Koonin (National Institutes of Health, USA), we describe the first example of an archaeal anti-CRISPR protein. We show that the anti-CRISPR protein, which is expressed by a special type of hyperthermophilic DNA viruses, block the CRISPR-Cas system of their host, Sulfolobus islandicus, by directly interacting with one of the Cas proteins and likely forming an oligomer.

We go on to determine the crystal structure of the AcrID1 anti-CRISPR protein and show that it forms a tight dimer with a tendency to oligomerise. These features (along with the extreme pH and temperature stability) are likely to be important for the ability of such a small protein to act as a “stick in the wheel” against the archaeal CRISPR-Cas system.

For more information, read our paper in Nature Microbiology.